(Note 1: if you just want the LUTs and color space data, jump down to the section titled "The Data".)

(Note 2: this is a slightly odd post for this blog. I normally only write about things directly relevant to 3D rendering here, and this post has very little to do with 3D rendering. Although it is relevant to incorporating rendered VFX into footage if you're a Blackmagic user.)

When you're doing VFX work it's important to first get your footage into a linear color representation, with RGB values proportional to the physical light energy that hit the camera sensor.

Color in image and video files, however, is not typically stored that way1, but rather is stored in a non-linear encoding that allocates disproportionately more values to darker colors. This is a good thing for efficient storage and transmission of color, because it gives more precision to darker values where the human eye is more sensitive to luminance differences. But it's not good for color processing (such as in VFX), where we typically want those values to be proportional to physical light energy.

If you're doing VFX work, you really want to know what transfer function your camera used when recording its colors. Otherwise you can only guess at how to decode the colors back to linear color.

Because of how important this is for a variety of use cases, pretty much every camera manufacturer documents and publishes their transfer functions. With two exceptions:

So it's really odd and also very frustrating that Blackmagic hasn't done this basic due diligence. Blackmagic doesn't even provide this information to people who have purchased their cameras.4

(Update: after posting this, a couple of people pointed out that Blackmagic does have a white paper that documents the RGBW chromaticities15 and one of the transfer functions of their Gen 5 color spaces. However, there are two more Gen 5 transfer functions they don't document, and they haven't documented any of their other numerous color spaces. Moreover, it's nearly impossible to find this white paper unless you already know it exists and where it is, because it's buried in the installation of one of their smaller software tools. So my overall criticism still stands.)

Gotta Do It Yourself

Since Blackmagic hasn't published this basic information themselves, and since my work recently shot footage on a Blackmagic camera for a show with heavy VFX work, I took it upon myself to do Blackmagic's homework for them and reverse engineer their cameras' color spaces for publication here.

I want to emphasize again that all of this data is basic information that any professional or semi-professional camera manufacturer absolutely should publish about their cameras. This is no more proprietary than information about how to navigate a camera's menu system. It's just "how to use the camera", but for VFX people.

There are a few places that already sell 3rd-party LUTs for Blackmagic cameras. Unfortunately, they're all oriented towards achieving "looks" with the footage, which is useless for VFX work. The color transformations we need for VFX are technical, not artistic.

Moreover, the places that sell these LUTs don't document how they make them, so even if they did publish linearization LUTs it would be hard to know if they were correct.

For that reason, I'm documenting here exactly how I created these LUTs. I'm also publishing the software tool I built for this purpose under an open source license so that others can reproduce and verify my work.5

Although Blackmagic Design doesn't publish any information about their color spaces, they do provide a software tool called Resolve that, among other things, can linearize footage from their cameras.6 In other words, Resolve has all of Blackmagic's transfer functions built into it, just not in a way that is accessible as data or formulas.

But the great thing about color processing is that you can always compare results before and after. And that's the key idea behind determining Blackmagic's transfer functions.

I wrote a tool called LUT Extractor that generates a very specific OpenEXR image with gray, red, green, and blue gradients from 0.0 to 1.0, each with 2^17 steps. The image looks like this7: 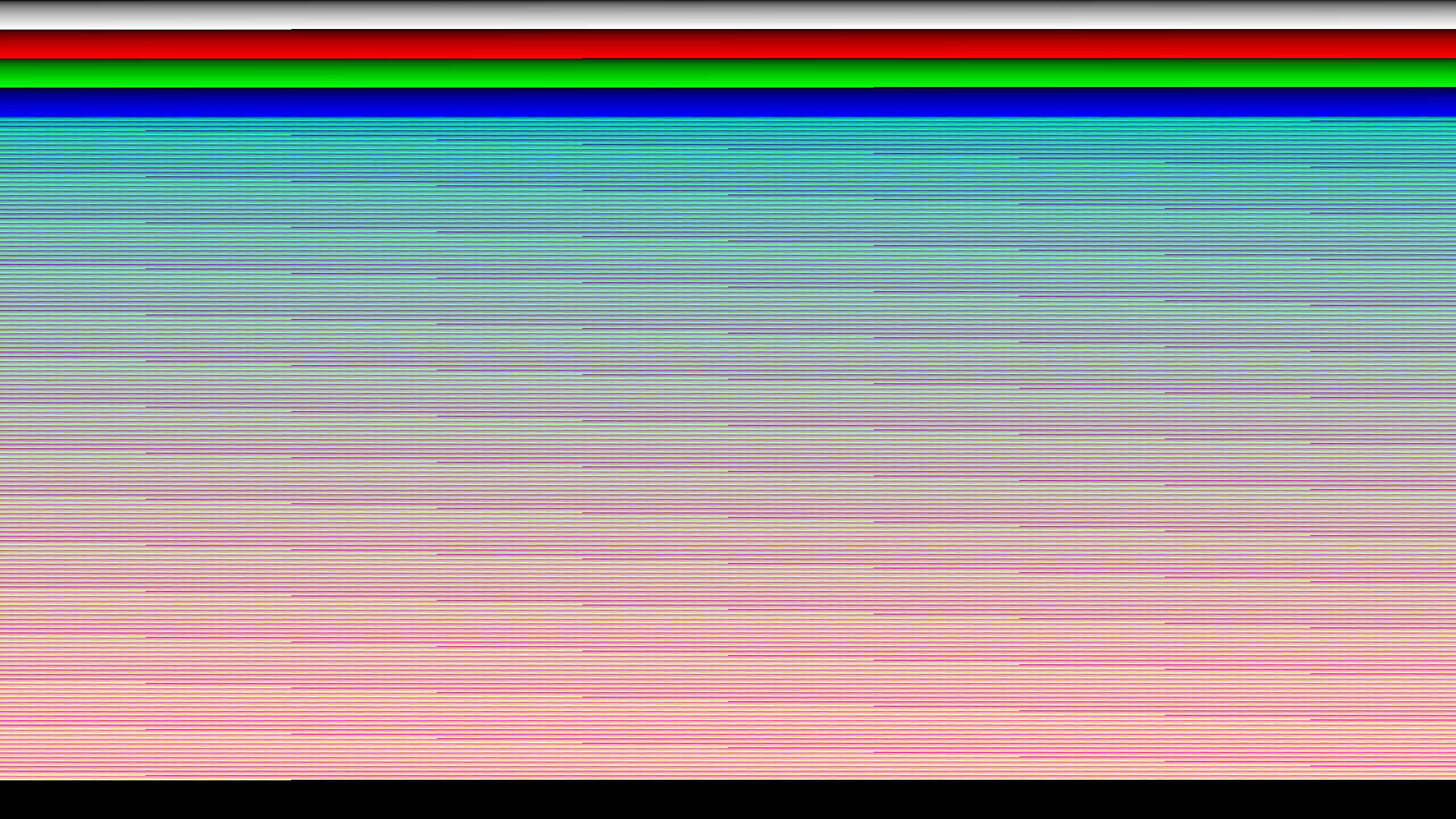 I then sent this image to a friend to pipe through Resolve (I wasn't able to install Resolve on my OS), once for each of Blackmagic's transfer functions.8 We transformed from encoded non-linear color to linear color for the exports, both because that's the transform we ultimately want to know and because the input for that is on a known, bounded interval. Linear color often exceeds the [0.0, 1.0] interval, whereas encoded color doesn't.

(Note: it's important to export at exactly the same resolution as the original image, and to do so as a lossless 32-bit floating point OpenEXR image.)

You can generate LUTs with 2^17 entries with this approach. But since that's overkill, I reduced them to 4096 entries, which is enough for 12-bit color without LUT interpolation.9

I used essentially the same process to determine the RGBW chromaticities of Blackmagic's color gamuts (which they also don't publish) as well. The only difference being that we stayed entirely in linear color and exported to CIE XYZ color space for that.

To accommodate those use cases I also reverse engineered analytic formulas for a subset of the transfer functions. Specifically, the log footage subset.

With the basic formula in hand, we just need to find the constants that match the target LUT. And it turns out this is pretty straightforward with a bit of iterative optimization.

My first attempt at this was to just throw some common optimization algorithms at the problem. And that worked fine—I got fits that were more than good enough for any practical purpose. But it turns out we can do even better thanks to the nature of the formula.

The standard log footage formula is a piecewise function consisting of a small linear segment near zero and a shifted/scaled logarithm for the rest of it. Both the linear and log parts have only a single free parameter if we keep the end points fixed, and we already know the end points from the first and last entries of the LUT. Moreover, the error metric for both the linear and log part have no local minimums other than the global minimum.

This means we can use a really simple iterative optimization algorithm that converges very quickly and very precisely (similar to but slightly more complex than a binary search) on each of the two parts separately.

In other words, for all practical purposes, the formulas are exact.

Blackmagic also has several non-log transfer functions. I haven't attempted to determine their formulas12, but the LUTs are still available.

So with that out of the way, here are Blackmagic Design's color spaces. For convenience, all names match what they are in Resolve's UI (at the time of posting), minus the "Blackmagic Design" prefix.

These are the linearizing LUTs (encoded color -> linear color). If you need the reverse LUTs (linear color -> encoded color) feel free to email me and I'll generate and post those too.

Both .cube and .spi1d formats are included.

These are listed in pseudo code, along with the maximum and average relative error13 compared to the original values in the corresponding LUT.

ln is the natural logarithm, ^ is exponentiation, and e is the standard mathematical constant e.

All constants were computed in 64-bit precision, and are listed with that full precision.14

These are given in CIE 1931 chromaticity coordinates.

(Note: the 4.6K Film Gen 1 chromaticities are missing because it doesn't seem to be a simple chromaticity transform. It's possible we screwed up the export from Resolve. If you need it, feel free to get in touch and we can try again.)