In Defense of Brain-Dead Interpolation

Interpolating object transforms is a critical task for supporting transform motion blur in a 3d renderer. Psychopath takes a rather brain-dead approach to this and just directly interpolates each component of the transform matrices. This is widely considered to be wrong. The recommended approach is to first decompose the matrices into separate translation/rotation/scale components before interpolating.

In this post I'm going to argue that, for motion blur, the brain-dead approach is not only perfectly reasonable, but actually has some important advantages.

Deformation motion blur is used when a model is morphing or deforming in some way. A common example of this is animated characters such as animals or people. There is no simple transform that can describe what is happening to the mesh of a character when it's moving. In theory, the renderer could implement the entire rig used to animate the character, but that's not practical—particularly if you're trying to support multiple authoring applications (Maya, Blender, Houdini, Cinema 4d, etc.).

So instead, deformation motion blur is typically done very simply: the authoring application provides multiple snapshots of the mesh at different times, and the renderer linearly interpolates (or "lerps") the positions of each vertex between those snapshots.

Even though this approach is intended for things like deforming characters, it can also be used for simple transform-like motions. For example, a 90 degree rotation using deformation motion blur with two snapshots looks like this: 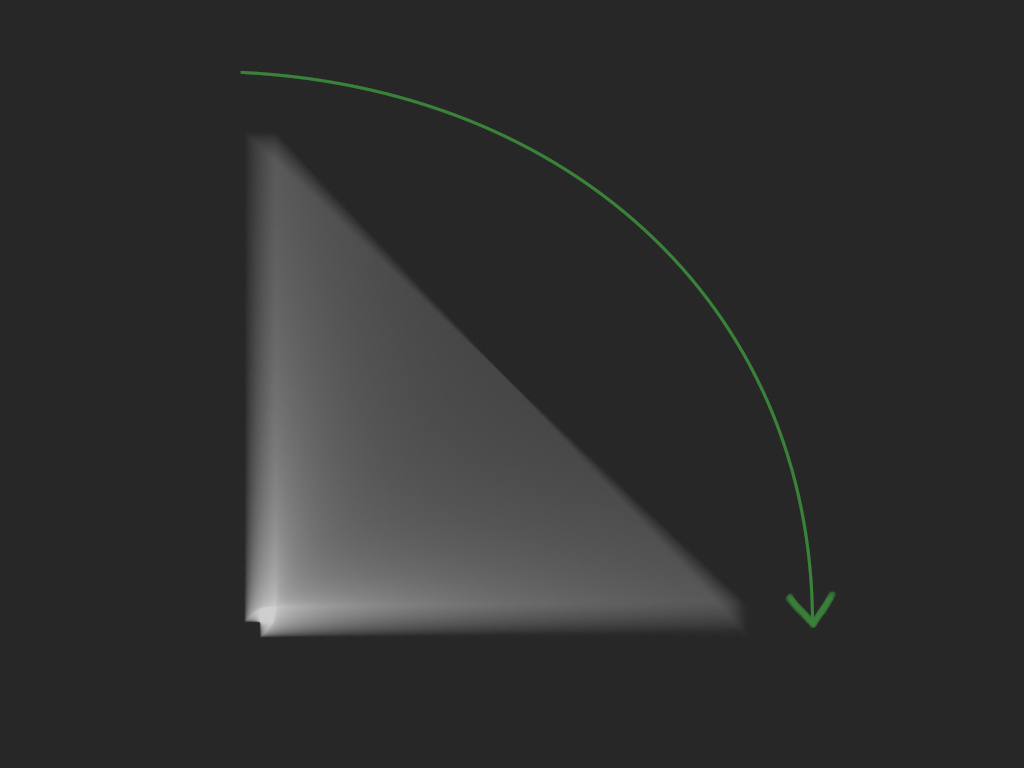 Instead of a circular arc like you would expect, there are just straight lines. This is because each point in the model is directly lerped between the snapshots. To fix this, you can feed the renderer more snapshots to get finer and finer linear segments. For example, here's the same rotation with five snapshots: 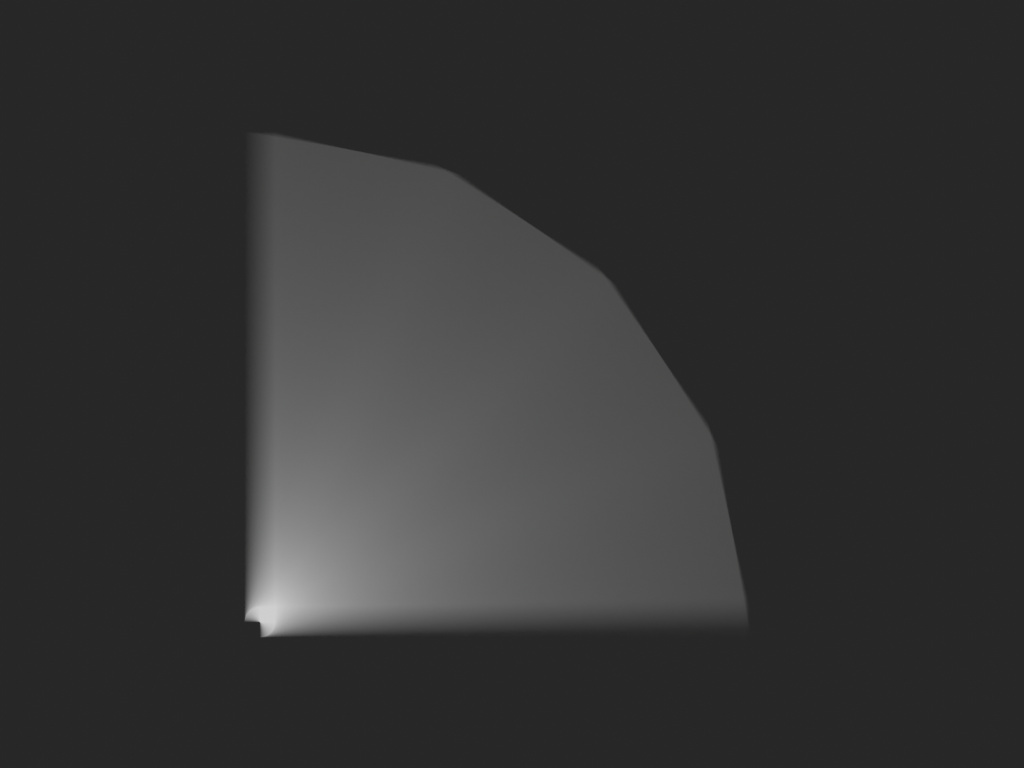 Regardless of whether this approach is used for complex deformations or simple transforms, these results are never "correct". They don't replicate the exact motion as it was in the authoring tool. But thankfully, that strict level of correctness isn't necessary.

With motion blur we're trying to get a photographic effect, not animate things across multiple frames. And for that purpose, approximations are good enough. In practice, the vast majority of motions only need a handful of linear segments to be approximated with good accuracy. And in the rare cases where more snapshots are needed we can crank them up as much as we need.

Now let's come back to transform motion blur. There are two basic approaches to interpolating object transforms in an offline renderer:

Decomposed transform interpolation as it's usually implemented today was first proposed in the paper Matrix Animation and Polar Decomposition by Shoemake et al. It's a great paper, and worth a read on its own. It also covers the benefits of decomposed interpolation over direct matrix interpolation.

At first glance, that's really convincing. Of course you don't want your objects to scale erroneously while rotating! But not so fast. Let's take a look at what these two approaches actually look like, using a simple example.

The example is a rapidly spinning planet with a character on it. The character is supposed to remain on the planet's surface, as if their feet were glued down. Here are the start and end positions that we will be interpolating: 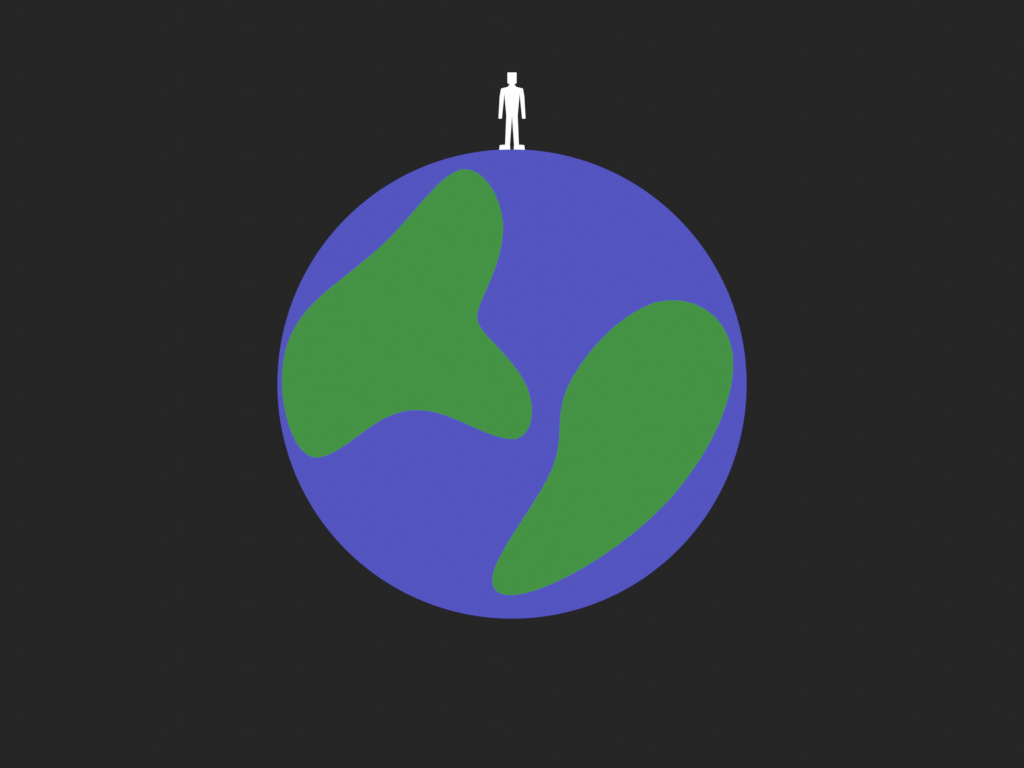 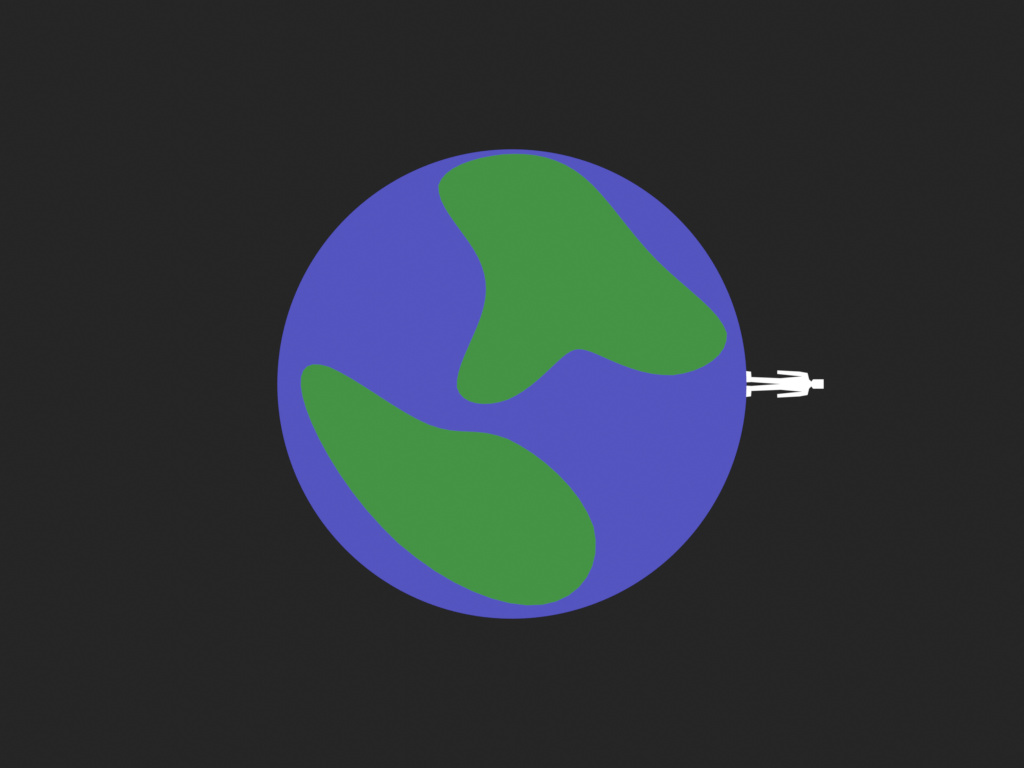 (This is admittedly a contrived example, but it's meant to be illustrative, not representative.)

If we use the brain-dead direct matrix interpolation approach, then the half-way point looks like this: 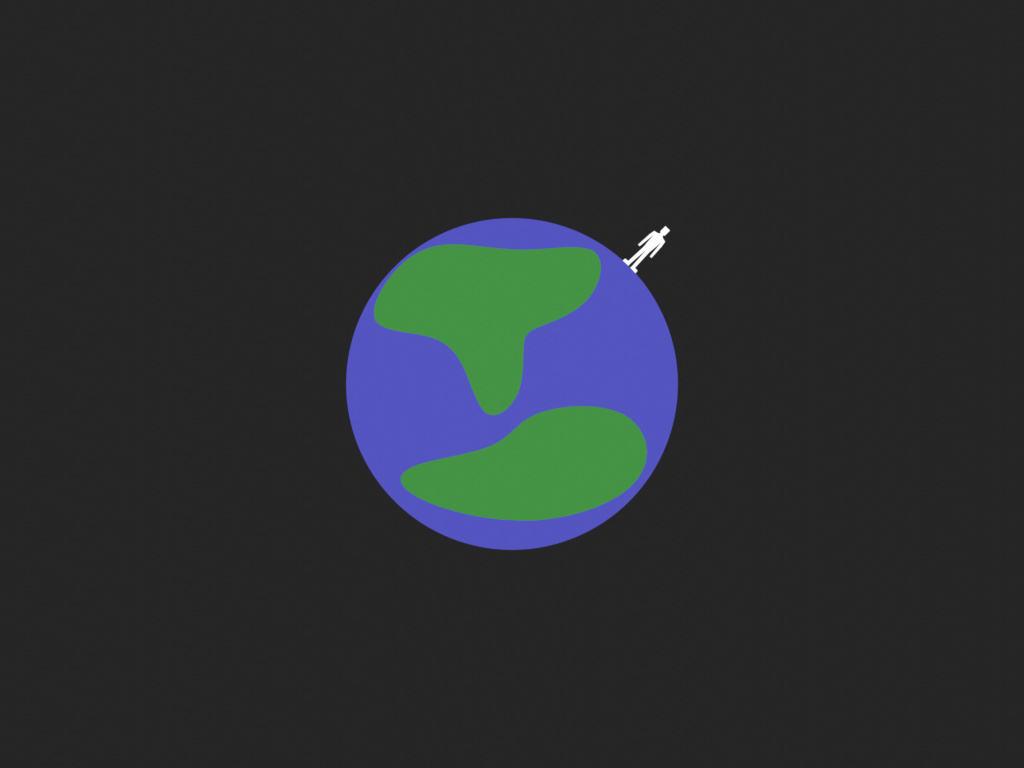 This demonstrates exactly the issue that people warn against: both the planet and the character are scaled down when they shouldn't be. This is clearly a wrong result!

As mentioned above, the typical fix is to use decomposed transform interpolation instead. The half-way point using that approach looks like this: 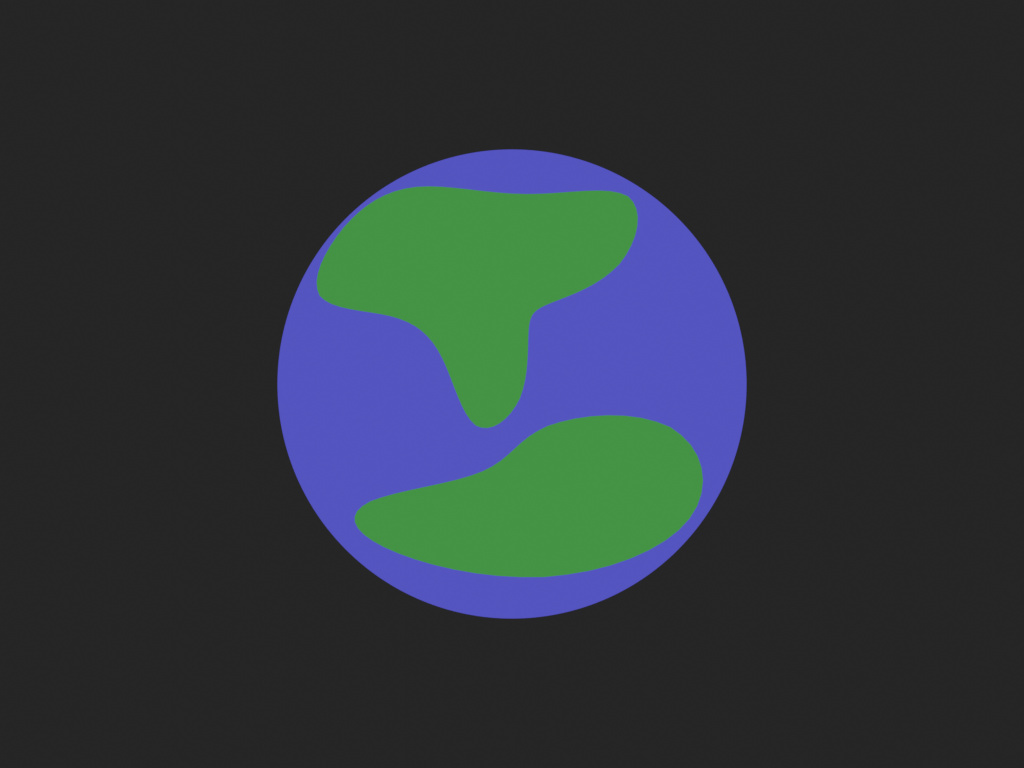 So it works. Sort of. The planet now maintains its scale. But the character has seemingly vanished. An x-ray view reveals what happened: 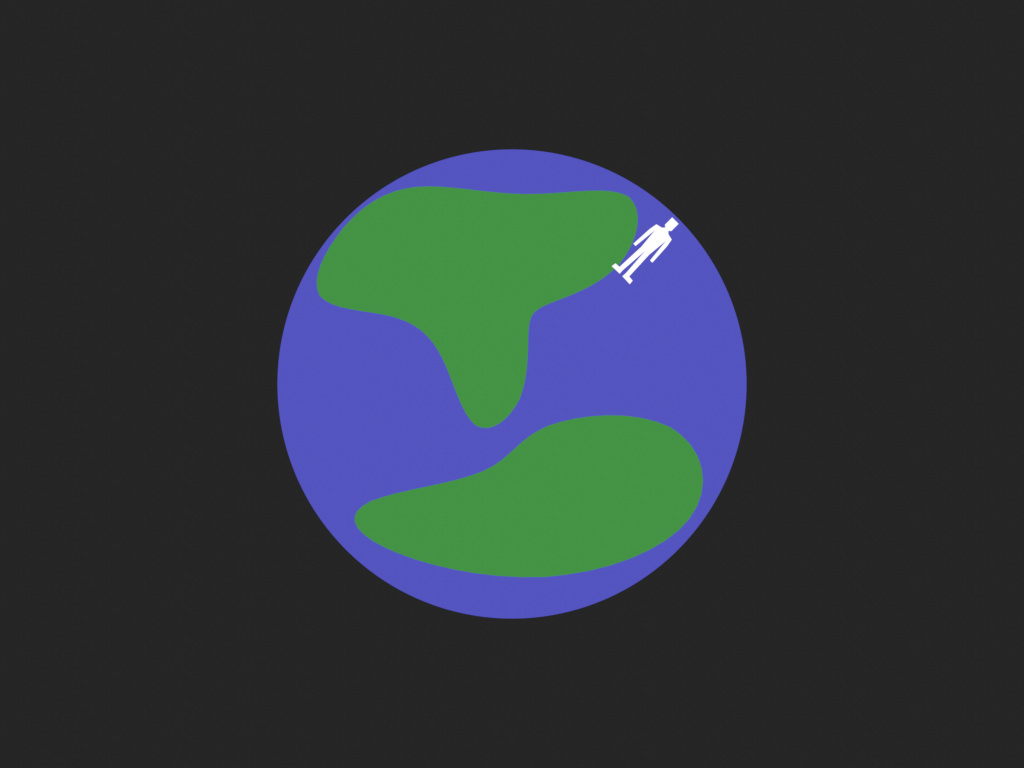 The character has sunk into the surface of the planet. This is also clearly a wrong result!

This example highlights that there's actually a trade-off between these two approaches:

The reason for this becomes more obvious if we look at the full motion-blurred results. Here's direct matrix interpolation: 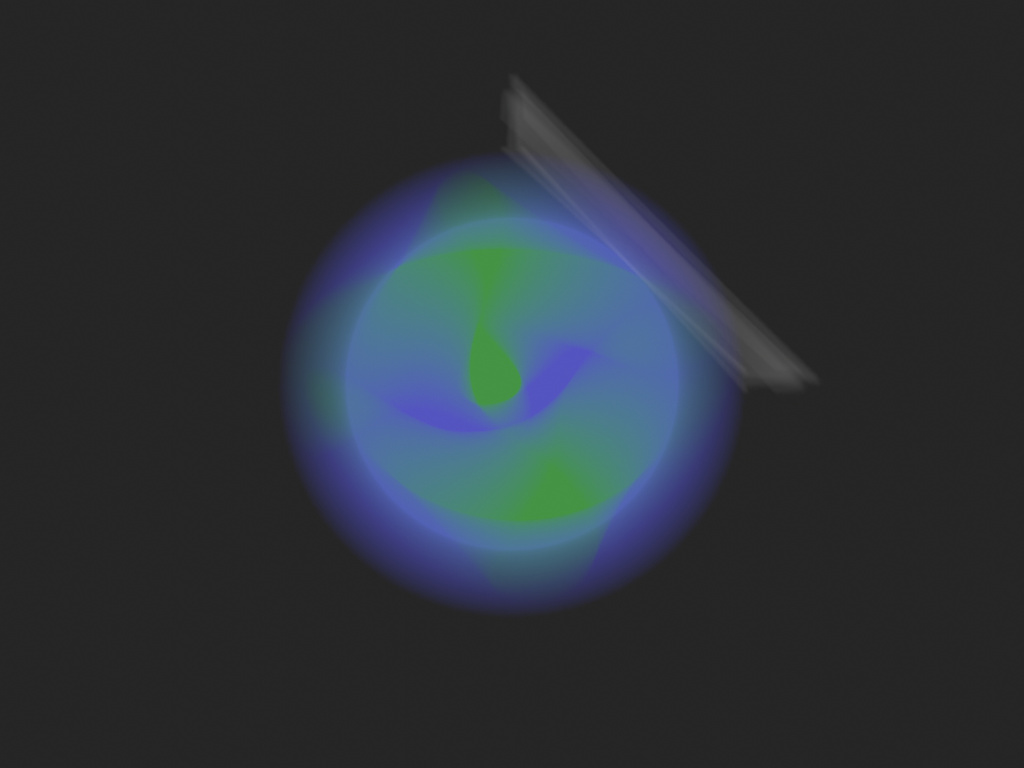 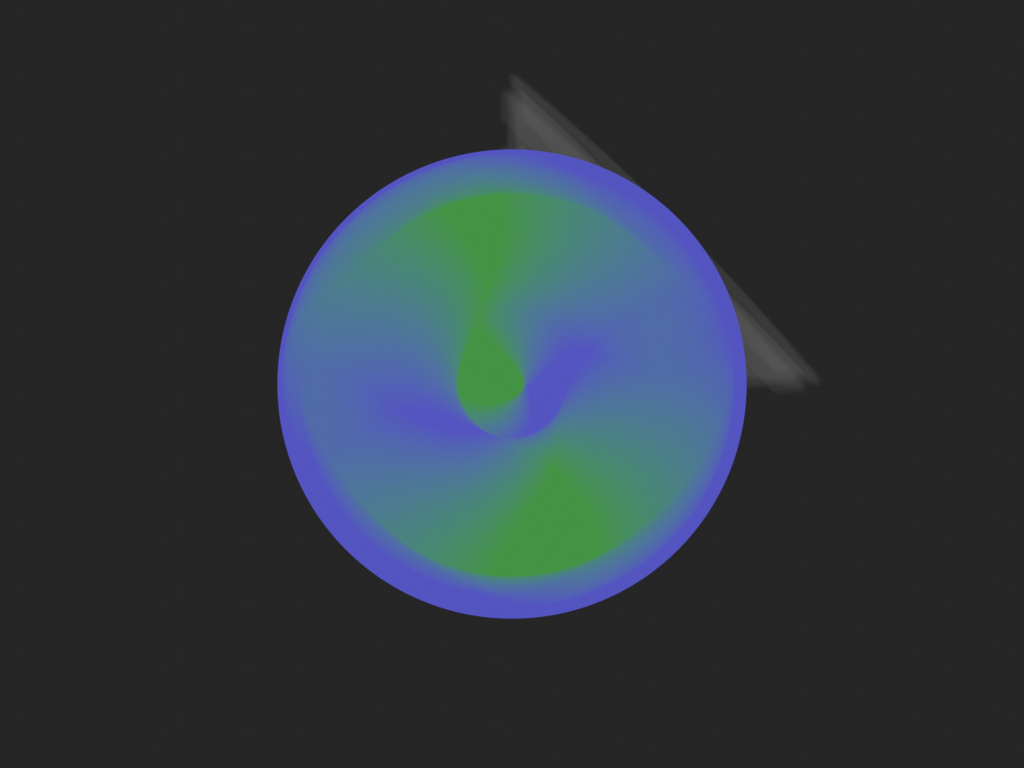 With direct matrix interpolation, all points follow simple linear paths4, just like deformation motion blur. And that's why the character's feet stay properly planted: if any two points share a position in every snapshot, then they will interpolate together as well, regardless of what transforms put them there. Those linear motion paths, however, are also the reason for the erroneous scaling.

With decomposed interpolation, however, the surface of the planet follows a circular motion path, which preserves scale. And the character's rotation around its own origin does as well. But its translation follows a linear path. This mismatch between circular and linear motion paths is what causes the character to erroneously sink below the planet's surface.

It might seem like decomposed interpolation is still better. It's at least preserving the object's scale, which makes it more correct. And as you add more motion segments, the path of the character will converge to remain properly on the planet's surface.

However, you can say exactly the same thing, but reversed, about direct matrix interpolation: it at least preserves relative object positions, which makes it more correct. And as you add more motion segments, the objects will converge to retain their scale.

As an animator and rigger, I don't see much distinction between these two approaches in terms of correctness. From my perspective, both are wrong. And meaningfully so, as demonstrated in the example above.

The root issue is that by the time scene data reaches the renderer, all of the relevant constraints on motion (whether from rigging, carefully hand-crafted animation curves, or simulation) have long since been discarded. There's no way for the renderer to know how the objects are supposed to behave. Maybe they're supposed to shrink! Or maybe the planet and character are part of a complex mechanical system that gives them a sophisticated and very specific motion relationship.

The bottom line is that there's no way for the renderer to know. The only data the renderer has is some transforms at specific snapshots in time. And the only thing it can do with that data is some kind of basic interpolation.

This is a really important distinction between motion blur in offline renderers vs more general transform handling in things like game engines or authoring tools. A game engine knows how its objects are supposed to behave. And an authoring tool lets a person craft motion according to their intentions. But when you're just doing raw interpolation for motion blur, you have essentially zero insight into any of that.

Renderers fundamentally rely on having enough data points to approximate the desired motion with sufficient accuracy. Without enough data points, it will be wrong no matter what interpolation approach you take.

It's all about tradeoffs.

It also has the nice property of keeping coincident points coincident, which can be useful for co-moving objects and for preventing erroneous geometry intersection/separation. Moreover, you even get these benefits when using deformation and transform motion blur in combination—e.g. a deforming character wielding/wearing a transforming prop—since they're both interpolating in exactly the same way.

On the other hand, decomposed interpolation preserves object scale. And although not all objects are rigid bodies, a large majority of the objects animated via transforms are. So scale is a useful thing to preserve by default. It's also probably less surprising to non-technical users. And for rapidly spinning objects like wheels or propellers, where the scaling would really become noticeable, decomposed interpolation can significantly reduce the number of motion segments you need—as long as the object origins are well placed.

I think the pros of each approach basically break down like this:

Importantly, since neither approach gives reliably correct results, any production-oriented renderer needs to support multiple motion segments anyway.6 And if you take that as a given, then both approaches can achieve arbitrarily accurate results by just throwing more motion segments at them.

In Psychopath, I decided to go with direct matrix interpolation.7 To my sensibilities there's something elegant about all motion blur just being about individual points moving along paths in space. I also like having all motion blur treated uniformly, regardless of whether it's from deformations or transformations. And from a production standpoint, I think avoiding erroneous intersection/separation of co-moving geometry is actually a significant benefit.

Lastly, I just really enjoy seemingly brain-dead solutions that actually turn out to be really good.

But the real point I'm trying to make with this post is that both approaches are perfectly good solutions for motion blur in an offline renderer. So let's put to bed this idea that direct matrix interpolation is somehow "wrong". Because at least in this context it's not. It's just making a different set of legitimate tradeoffs.