A little while back, the company Solid Angle published the paper "Blue-noise Dithered Sampling". It describes a method of distributing sampling error as blue noise across the image plane, which makes it appear more like error-diffusion dithering than typical render noise.

Or in other words, it turns renders like this:1 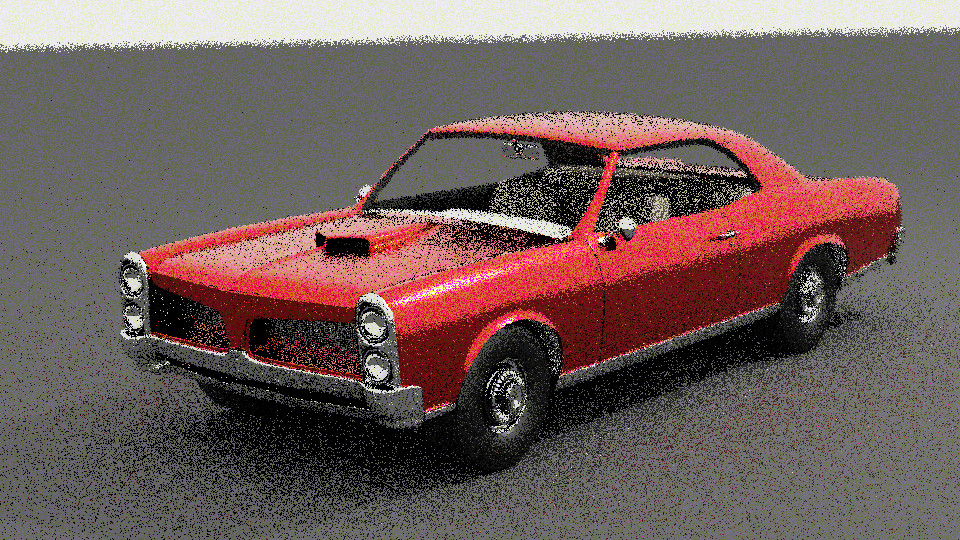 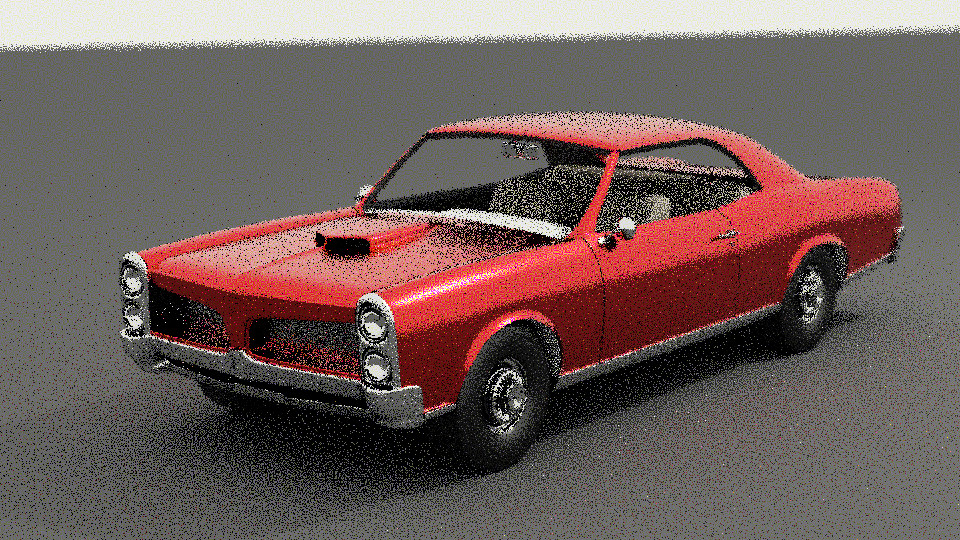 The actual amount of noise is the same between these two images. But the second image distributes the noise differently, giving it a more even, pleasing appearance. This is a really cool concept, but the original technique from Solid Angle has some unfortunate limitations.2

However, I recently came across "Screen-Space Blue-Noise Diffusion of Monte Carlo Sampling Error via Hierarchical Ordering of Pixels" by Ahmed and Wonka, which describes a really cool new way to accomplish this that eliminates most of the limitations I care about. And it's based on a remarkably simple idea.

Moreover, I realized while reading the paper that an even simpler implementation of their idea is possible, based on the same concept. And it only takes a handful of lines of code and a small lookup table (as small as 24 bytes with bit packing).

So in this post I'm going to present this simpler implementation. Credit still goes to Ahmed and Wonka, because the key insight behind this is directly from their paper. But I believe what I've come up with is both simpler and more robust than the specific implementation in their paper.

Before diving into blue-noise dithered sampling, let's touch on another way you can distribute sampling error more evenly across an image.

If you have a low-discrepancy sequence like Sobol, Halton, etc., you can use them with a space-filling curve to get results like this: 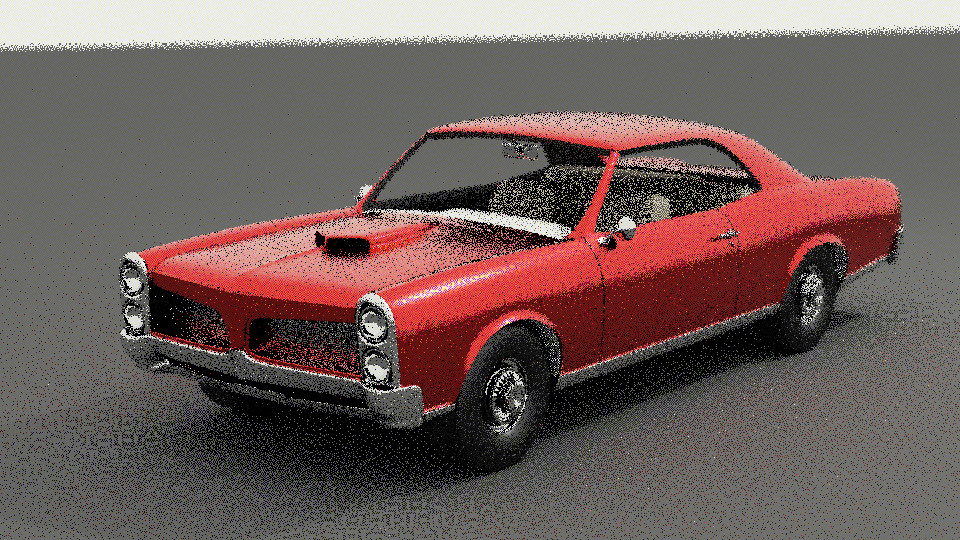 If you look closely, the sampling error has a visible structure to it, which isn't great. But the error is definitely distributed more evenly than a typical render. 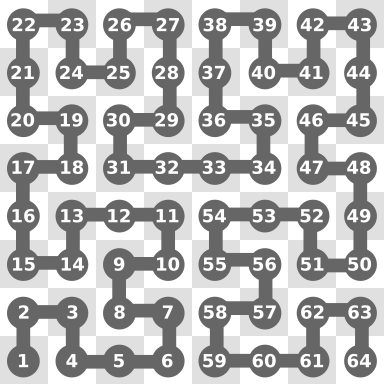 And if you're taking 32 samples per pixel, then you give the first 32 samples from your low-discrepancy sequence to pixel 1, the second 32 samples to pixel 2, and so on.

Because these space filling curves visit the pixels in a spatially-local, hierarchical way, this puts samples that are close in sequence order close in image space as well. Combined with the fact that low-discrepancy sequences tend to put similar samples far apart in the sequence, and dissimilar samples close, this maximizes the difference between the samples of nearby pixels. Which gives this more even, dithering-like error distribution.

So that's pretty cool! But this particular trick has been known and exploited for quite some time. I certainly played around with it in much earlier versions of Psychopath. The problem with it are those pesky structured sampling artifacts.

The key insight of Ahmed and Wonka's paper is that if you do your sampling like above, but apply a hierarchical shuffle to the pixel order of the space filling curve, then the structure of the sampling error is randomized while still preserving its even distribution. And that results in a blue-noise dithering effect.

But it visits the quadrants of each square in a very specific order. So the idea is to keep the quadrant hierarchy, but randomize the order in which the quadrants are visited. For example, the Hilbert order illustrated above might turn into something like this: 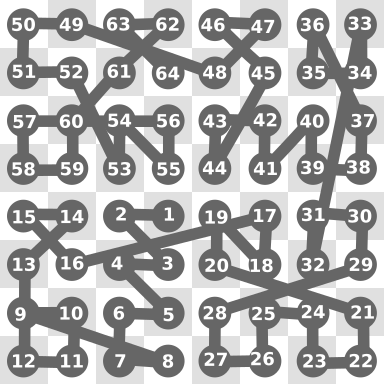 And that's really the key idea of Ahmed and Wonka's technique. A hierarchical shuffle is all you need to turn the structured render I showed above into this blue-noise dithered image:

Which is pretty amazing!

So before we get to shuffling, we'll first want a way to quickly compute a pixel's index along our space-filling curve on the fly. Or in other words, we'd like a function that takes a pixel's xy coordinates and spits out its index along the curve. Then we can immediately compute its sample-sequence offset as curve_index * samples_per_pixel.

While it's certainly possible to implement such a function for the Hilbert curve, it's unnecessarily expensive for our use case. And that's because there's another curve that has the same hierarchical quadrant behavior, but is much cheaper to compute. And that's the Morton curve3, which looks like this: 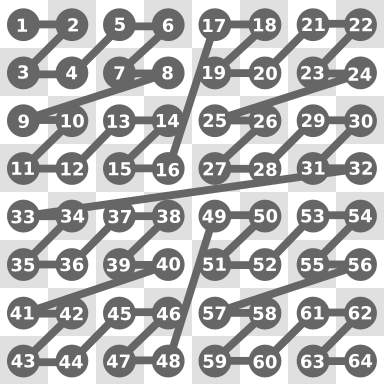 Used on its own, it doesn't distribute sampling error as nicely as the Hilbert curve. But that doesn't matter since we're going to be shuffling the quadrants anyway, and the only difference between Hilbert and Morton is the quadrant order.

To implement an xy -> curve_index function for the Morton curve you just interleave the bits of x and y. It's really that simple. And with some bit fiddling tricks, it can be quite fast. I recommend Fabian Giesen's post for an implementation that can do both xy -> curve_index and curve_index -> xy (should you ever need it).

So now we can compute the curve indices for our pixels on the fly!

Back to shuffling. It turns out that the hierarchical quadrant shuffling we need to do is equivalent to performing a base-4 Owen scramble on the Morton curve indices.4

And this is the point where I recommend that you read my LK hash post (if you haven't already) before continuing. In that post I cover both what base-2 Owen scrambling is, as well as a per-bit hash-based implementation. If you read up to (but not including) the section titled "Owen hashing", you should be good to understand the rest of this post.

You back now? Great.

So base-4 Owen scrambling means that we recursively split things into 4 segments and shuffle those segments. And if you think about it for a minute, performing that kind of splitting-and-shuffling along the length of the Morton curve is exactly what we're looking for. It will recursively shuffle all the quadrants at every level of the hierarchy.

So how do we implement base-4 Owen scrambling? It turns out we can do pretty much the same thing as the per-bit hashing approach. For reference, here's the base-2 version of that again (from my LK hash post):

Base-4 follows the same basic idea, but with the following differences:

To illustrate this, I'll use pseudo code that's a little lower level than the base-2 code above. It looks something like this (note: the comments make it look large, but this is actually only three lines longer than the base-2 version above):

It's more-or-less the same as base-2 conceptually, except instead of using bit flipping to alter the bits, we're using a lookup table. The table is quite small, and looks like this:

Like the Owen scramble from my LK hash post, we want this base-4 version to be seedable as well. To do this, we simply replace our fixed hash function with one that's seedable:

And that's it. We have our base-4 Owen scrambling function.5

(Here's a real implementation in Rust, for reference.)

Putting it all together.

And that's all we need to implement the blue-noise dithering technique. In a simplified render loop, putting it all together might look something like this:

Where spp is the total samples per pixel, and render_sample() uses the sample index to generate sample dimensions for a single path and trace it.

And with that, we have blue-noise dithered sampling! Shockingly simple, I think, once you have the components. You can obviously get a lot more sophisticated with this if you want, but that's really all there is to it.

Progressive rendering and other notes.

One of the unfortunate limitations of this approach is that you only get a blue noise distribution at full sample counts. So, for example, if you allocate 64 samples to each pixel, but only render 4 of them, you don't get the blue-noise dithering effect.

In fact, with many low-discrepancy sequences (including at least Sobol) you won't even get a proper random distribution: the render can end up visibly biased in weird ways. And that's because the sample order within all the pixels is correlated. If you render all allocated samples then this isn't an issue, because the order doesn't matter if you rendered them all anyway. But if you're doing adaptive sampling or progressive preview rendering, it's a problem.

Fortunately, there is a fix for the bias issue: shuffle the sample indices within each pixel as well. For the Sobol sequence this is extremely straightforward: just apply a base-2 Owen scramble to the sample indices.6 Revisiting our render loop example above, that would look something like this:7

With the sample shuffling in place, our blue-noise technique just degrades to a non-dithered noise when you haven't reached the full allocated sample count. That's a bit disappointing, because we'd like to have that dither effect regardless of how many allocated samples we use.

But at least it isn't weird and biased anymore. So we can use it as our default sampler because it's never worse than normal. In other words, you get blue noise in favorable conditions and normal results otherwise.

In Psychopath, I'm now using this technique in combination with Brent Burley's scrambled+shuffled Sobol sequence (but with the improved hash from my LK hash post). I really like this particular combination because:

All-in-all, it's a great sampler.

I'm really happy with how simple and effective this implementation is. And it should be easy to integrate into just about any renderer, I suspect.

I'm definitely curious if there's a way to get a sampler like this to preserve its blue-noise properties at partial sample counts. And I'm especially curious if that can be done while keeping the same spirit of this technique (e.g. eschewing large pre-computed tables, etc.). It's worth noting that "A Low-Discrepancy Sampler that Distributes Monte Carlo Errors as a Blue Noise in Screen Space" is a previous technique that accomplishes progressive blue-noise dithering, although it does so via tables computed in an offline optimization process. But perhaps there's some inspiration there, if someone is curious to take a crack at it.

I again want to give a shout out to both Ahmed and Wonka for their great paper and amazing insight. What I've presented in this post is really nothing more than a simpler way to implement their technique.